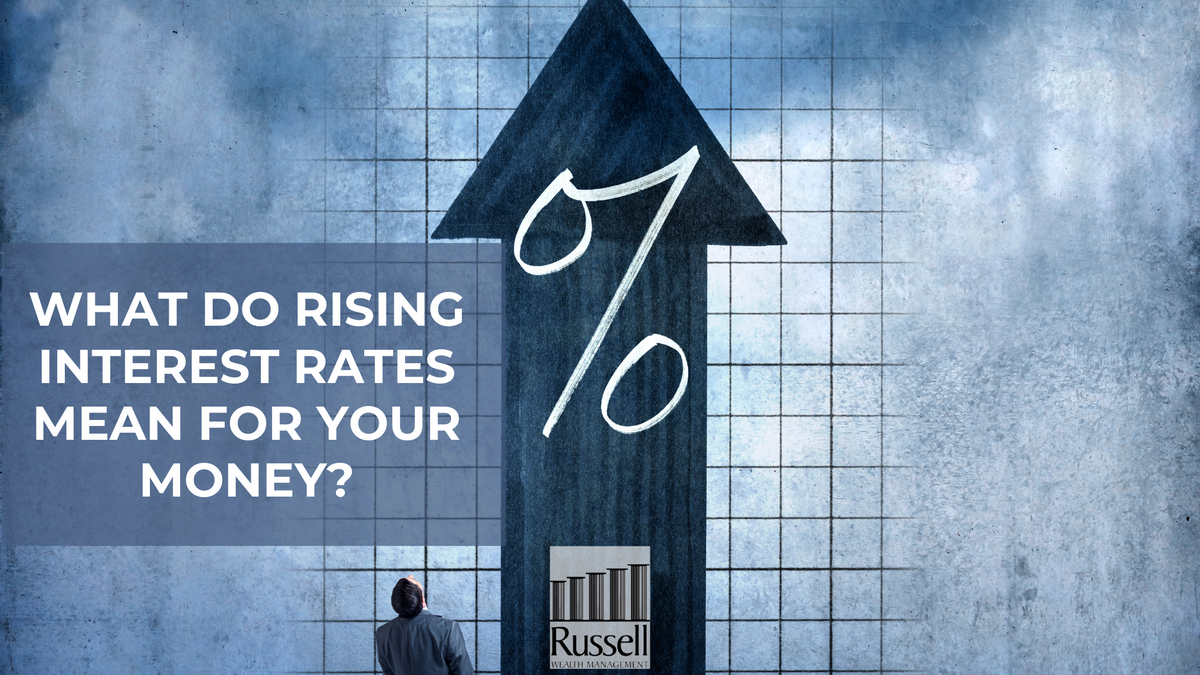 What Do Rising Interest Rates Mean for Your Money

On March 16, 2022, the Federal Open Market Committee (FOMC) of the Federal Reserve raised the benchmark federal funds rate by 0.25% to a target range of 0.25% to 0.50%. This is the beginning of a series of increases that the FOMC expects to carry out over the next two years to combat high inflation.1

Along with announcing the current increase, the FOMC released economic projections that suggest the equivalent of six additional 0.25% increases in 2022, followed by three or four more increases in 2023.2 Keep in mind that these are only projections, based on current conditions, and may not come to pass. However, they provide a helpful picture of the potential direction of U.S. interest rates.

What is the federal funds rate?

The federal funds rate is the interest rate at which banks lend funds to each other overnight to maintain legally required reserves within the Federal Reserve System. The FOMC sets a target range, usually a 0.25% spread, and then sets two specific rates that act as a floor and a ceiling to push the funds rate into that target range. The rate may vary slightly from day to day, but it generally stays within the target range.

Although the federal funds rate is an internal rate within the Federal Reserve System, it serves as a benchmark for many short-term rates set by banks and can influence longer-term rates as well.

Why does the Fed adjust the federal funds rate?

The Federal Reserve and the FOMC operate under a dual mandate to conduct monetary policies that foster maximum employment and price stability. Adjusting the federal funds rate is the Fed's primary tool to influence economic growth and inflation.

The FOMC lowers the federal funds rate to stimulate the economy by making it easier for businesses and consumers to borrow, and raises the rate to combat inflation by making borrowing more expensive. In March 2020, when the U.S. economy was devastated by the pandemic, the Committee quickly dropped the rate to its rock-bottom level of 0.00%–0.25% and has kept it there for two years as the economy recovered.

The FOMC has set a 2% annual inflation goal as consistent with healthy economic growth. The Committee considered it appropriate for inflation to run above 2% for some time in order to balance the extended period when it ran below 2% and give the economy more time to grow in a low-rate environment. However, the steadily increasing inflation levels over the last year — with no sign of easing — have forced the Fed to change course and tighten monetary policy.

How will consumer interest rates be affected?

The prime rate, which commercial banks charge their best customers, is tied directly to the federal funds rate and generally runs about 3% above it. Though actual rates can vary widely, small-business loans, adjustable-rate mortgages, home-equity lines of credit, auto loans, credit cards, and other forms of consumer credit are often linked to the prime rate, so the rates on these types of loans typically increase with the federal funds rate. Fed rate hikes might also put upward pressure on interest rates for new

fixed-rate home mortgages, but these rates are not tied directly to the federal funds rate or the prime rate.

Although rising interest rates make it more expensive for consumers and businesses to borrow, retirees and others who seek income could eventually benefit from higher yields on savings accounts and certificates of deposit (CDs). Banks typically raise rates charged on loans more quickly than they raise rates paid on deposits, but an extended series of rate increases should filter down to savers over time.

What about bond investments?

Interest-rate changes can have a broad effect on investments, but the impact tends to be more pronounced in the short term as markets adjust to the new level.

When interest rates rise, the value of existing bonds typically falls. Put simply, investors would prefer a newer bond paying a higher interest rate than an existing bond paying a lower rate. Longer-term bonds tend to fluctuate more than those with shorter maturities because investors may be reluctant to tie up their money for an extended period if they anticipate higher yields in the future.

Bonds redeemed prior to maturity may be worth more or less than their original value, but when a bond is held to maturity, the bond owner would receive the face value and interest, unless the issuer defaults.

Thus, rising interest rates should not affect the return on a bond you hold to maturity, but may affect the price of a bond you want to sell on the secondary market before it reaches maturity.

Although the rising-rate environment may have a negative impact on bonds you currently hold and want to sell, it might also offer more appealing rates for future bond purchases.

Bond funds are subject to the same inflation, interest rate, and credit risks associated with their underlying bonds. Thus, falling bond values due to rising rates can adversely affect a bond fund's performance.

However, as underlying bonds mature and are replaced by higher-yielding bonds within a rising

interest-rate environment, the fund's yield and/or share value could potentially increase over the long term.

How will the stock market react?

Equities may also be affected by rising rates, though not as directly as bonds. Stock prices are closely tied to earnings growth, so many corporations stand to benefit from a more robust economy, even with higher interest rates. On the other hand, companies that rely on heavy borrowing will likely face higher costs going forward, which could affect their bottom lines.

The stock market reacted positively to the initial rate hike and the projected path forward, but investors will be watching closely to see how the economy performs as interest rates adjust — and whether the increases are working to tame inflation.3

The market may continue to react, positively or negatively, to the government's inflation reports or the Fed's interest-rate decisions, but any reaction is typically temporary. As always, it's important to maintain a

long-term perspective and make sound investment decisions based on your own financial goals, time horizon, and risk tolerance.

The FDIC insures CDs and bank savings accounts, which generally provide a fixed rate of return, up to

$250,000 per depositor, per insured institution. The return and principal value of stocks and investment funds fluctuate with market conditions. Shares, when sold, may be worth more or less than their original cost. Investments offering the potential for higher rates of return also involve higher risk.

Investment funds are sold by prospectus. Please consider the fund's objectives, risks, charges, and expenses carefully before investing. The prospectus, which contains this and other information about the investment company, can be obtained from your financial professional. Be sure to read the prospectus carefully before deciding whether to invest.

Content in this material is for general information only and not intended to provide specific advice or recommendations for any individual. All performance referenced is historical and is no guarantee of future results. All indices are unmanaged and may not be invested into directly.

The information provided is not intended to be a substitute for specific individualized tax planning or legal advice. We suggest that you consult with a qualified tax or legal professional.

This article was prepared by Broadridge.